Your voice for Regional QLD

Grasping the balance of power

Representation without the city noise

Countdown to next QLD State Election:

The Regional Australia Party (QLD) has been created to ensure stronger political representation to Queensland’s regional & rural residents. Through the formation of party local branches, we will give our members a voice and the opportunity to participate in policy development and candidate selection. We aim to become the indispensable partner of any government formed and champion the interests of regional residents.

The Party shall relentlessly pursue the provision of services for the well-being of residents and the timely delivery of infrastructure to enhance the liveability and economic growth of our regions. Through the adherence to the Australian Constitution, the recognition of the separation of Commonwealth and State powers and the democratic process we shall forge the framework to deliver growth, opportunity and prosperity for regional residents, to the benefit of all Australians. If you love your region and believe that it and other like regions are indispensable to the fabric and the wealth of the State and the Nation, you can Join Us to create the booming voice of the regions.

What is Regional Queensland?

Regional Queensland is the area outside the south-east corner other wise known as South East Queensland (SEQ) of the QLD State. SEQ is regarded as a Metropolitan conurbation of Brisbane, Sunshine Coast, Gold Coast and the Ipswich area.

Regional Queensland can be broken into six major regions:

The Cairns, Townsville, Rockhampton and Toowoomba based regions have a significant large ‘outback’ area that plays a special role in these regions.

How did these regions evolve?

Queensland covers a large area. The smallest of the regions, that of Wide Bay Burnett, covers an area towards the size of Tasmania and the Mackay Region is as large as Tasmania. The larger of these regions based on Cairns, Townsville, Rockhampton and Toowoomba have areas equivalent to or larger than the State of Victoria. The Cairns/ Far North Region is equivalent in depth from north to south as the State of New South Wales.

The ports established themselves naturally, initially because they provided superior safe anchorages required by the transport technology of the time to move freight and people via sea to and from their regions.

Over the years, these ports/centres grew as major service hubs effectively becoming regional capital cities bringing higher order metropolitan type services to their regions. This, in turn, reduced costs of living and doing business, improving feasibility of developing the State’s large, previously underdeveloped agriculture and minerals, marine and tourism resources – a process that in the 1950s to 1990s, changed Queensland from being the “Cinderella State” to being a leader in national development.

As population grew, this regional structure has continued to consolidate with road and rail networks (and in the larger northern regions air service networks), radiating out from their hub cities with growing connections to the rest of Australia and overseas.

These regional areas form the backbone of Queensland’s economy accounting for the great bulk of the State’s earnings from overseas and the rest of Australia. 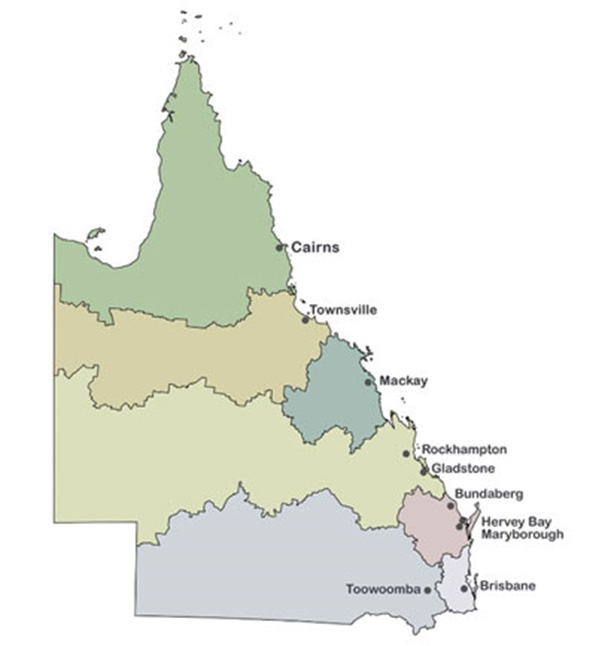 An exciting new option for your government representation